Today’s update is a big one and includes various changes, additions, and more across all game modes on Xbox One and PlayStation 4. The PC update which requires specific tuning for the platform will go live later this week.

You can find the full patch notes here or below:

Our 1.11 update begins rolling out today, kicking off at 10AM PT today on consoles and coming to PC later this week. All three modes get even bigger in this update with the debut of Gauntlets and new Elixirs in Zombies on PS4, a new week of Featured Playlists and the addition of Elevation and Madagascar to map rotation for Black Ops Pass owners in MP, our new-and-improved console looting interface in Blackout, and much more. 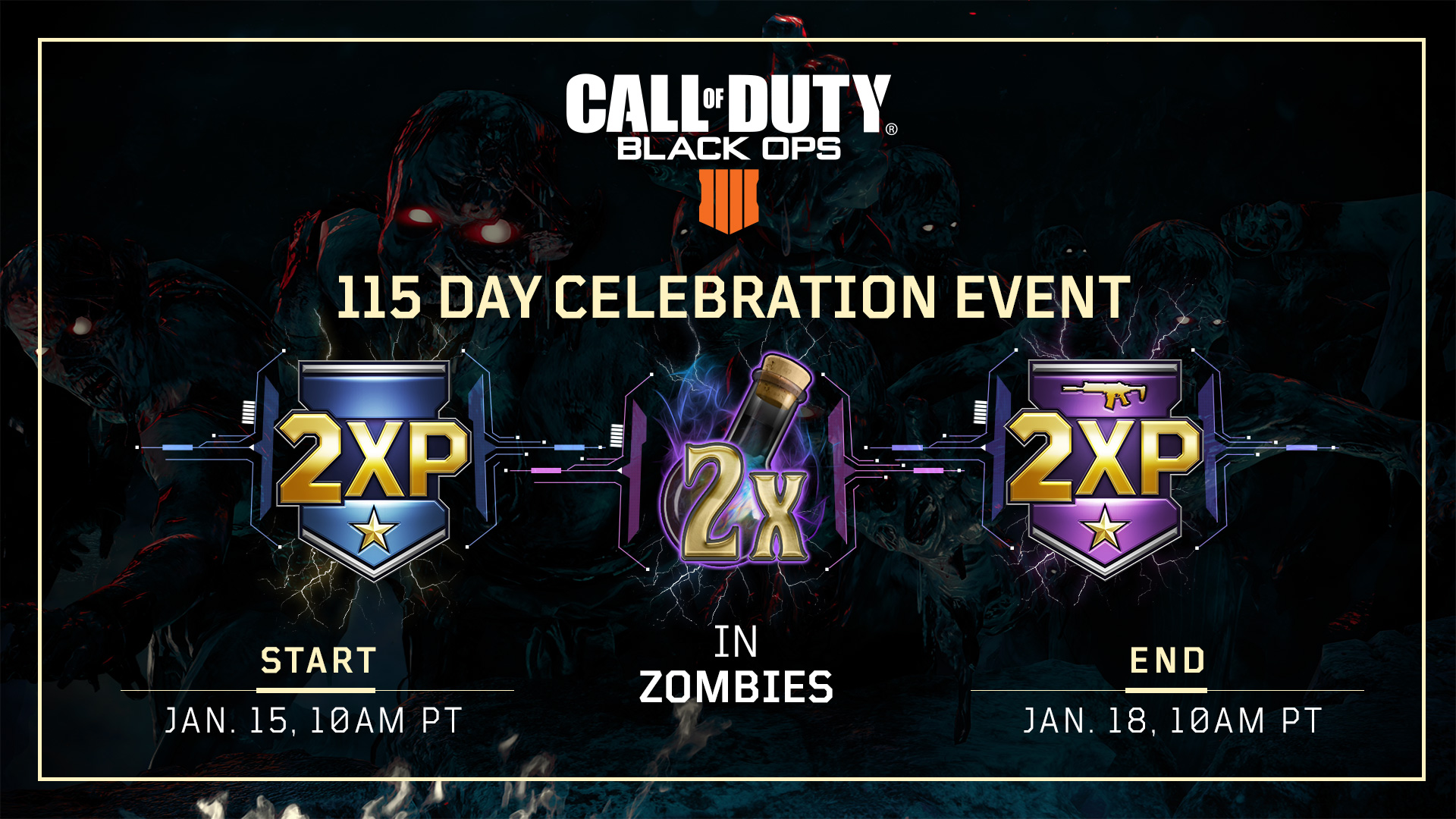 We’re also celebrating 115 Day with our Zombies community with Zombies 2XP, Zombies 2X Weapon XP, and 2X Nebulium Plasma today through 10AM PT Jan. 18 on all platforms! Zombies gets plenty of love this week with our new “Unsinkable” Gauntlet and new Elixirs (Perk Up, Refresh Mint, and Conflagration Liquidation), Elixir balance updates, adjustments to PhD Slider and those pesky Crimson Nosferatu, tons of improvements to gameplay and stability, and more. The list of updates is long, so check out the patch notes below and hit up our Jan. 11 community update for the lowdown on Gauntlets if you aren’t already caught up.

Be on the lookout for our 115 Day Treyarch Blog today as well, including details on this week’s updates, a look at what to expect in the near future with our 1.12 update, and a preview of the new features and content coming to Black Ops 4 Zombies over the coming months. We have big plans for Zombies in 2019, and we’re excited to share more when Zombies Director Jason Blundell stops by later today on Twitter…

Today’s new looting interface update on consoles in Blackout is also a big next step in our battle royale experience. This multi-row grid approach makes it much easier for players to loot their enemies and get back into the fight, and we’re eager to hear your feedback on the new system. We’ve also reduced the number of Concussion grenades in an inventory stack to 1 to help reduce the frequency of Concussions in the field, so drop into a match, loot away, and let us know what you think in the comments below.

We also have the first of our newest limited-time modes going live in Blackout later this week with “Down But Not Out“, a hectic new playlist where the rest of your squad redeploys each time the circle collapses, as long as at least one of you survives. Keep an eye out for more info later this week!

Here’s everything new in Black Ops 4:

The following updates are going live today on PS4, Xbox One, and PC:

The following updates are going live today first on PS4:

The following updates are going live today on consoles, with PC to follow later this week with additional PC-specific updates: